U2 in High Court for Stetson hat appeal 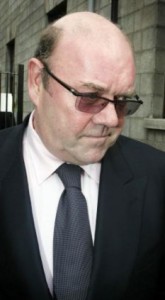 U2 manager Paul McGuinness leaves the High Court in Dublin, after band’s frontman Bono gave evidence at an appeal launched by the bands former stylist to keep the Stetson hat she claims the band gave her. PRESS ASSOCIATION Photo. Picture date: Wednesday October 18, 2006. Lola Cashman says she was given the hat and other memorabilia as gifts during U2’s Joshua Tree tour in 1987 but the band successfully sued last year for the recovery of the hat, a pair of metal hooped earrings, a green sweatshirt and a pair of black trousers, which they said she took without permission. See PA story IRISH U2. Photo credit should read: Niall Carson/PA.