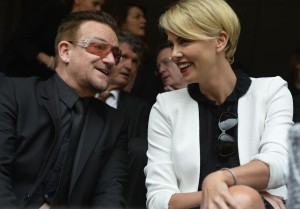 Irish band U2’s lead singer Bono and South African actress Charlize Theron attend the memorial service of South African former president Nelson Mandela at the FNB Stadium (Soccer City) in Johannesburg on December 10, 2013. Mandela, the revered icon of the anti-apartheid struggle in South Africa and one of the towering political figures of the 20th century, died in Johannesburg on December 5 at age 95. AFP PHOTO / ODD ANDERSEN