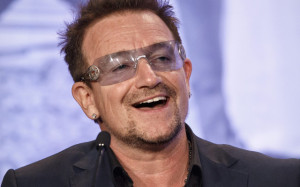 FILE – In this Friday, May 18, 2012 file photo, Bono, the Irish rock star and activist, speaks at the Symposium on Global Agriculture and Food Security following an appearance by President Barack Obama at the Ronald Reagan Building in Washington. It appeared Bono and arachnids didn’t mix when his “Spider-Man” musical had a rough Broadway run, but that didn’t keep a biologist from naming an actual spider species after the U2 singer. Jason Bond of Auburn University has identified 33 new species of trapdoor spider, including three of them in the California desert at Joshua Tree National Park. The park’s namesake is featured in the title and cover of U2’s 1987 album, “The Joshua Tree.” (AP Photo/J. Scott Applewhite, File)